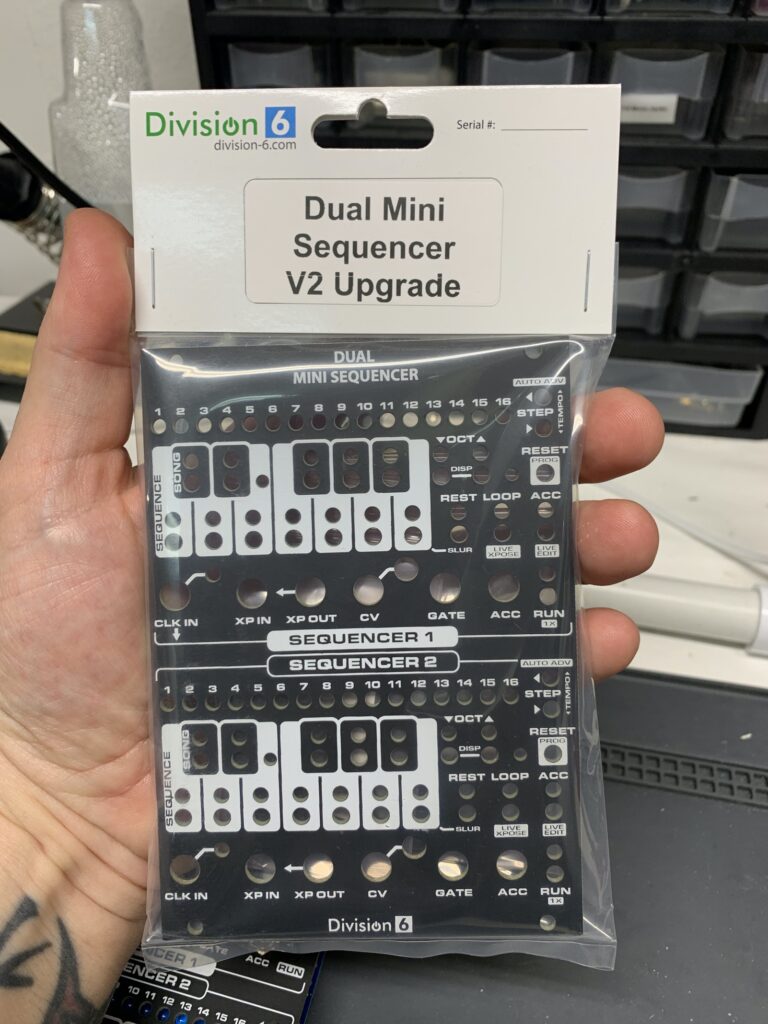 The Division 6 Dual Mini Sequencer has been an integral part of many of our compositions. This module gives you two handy sequencers in one small footprint.

Comprised of two independent sequencers (one on top and one on bottom), the Division 6 Dual Mini sequencer can not only play the notes, but it can transpose them as well.

This module can be utilized as a clock module and it can be ran in parallel for multiple CVs and/or triggers.

Not only can this module do all of these things, it can also be daisy chained to another Mini Sequencer to add even more steps in your sequence.

Being that the Dual Mini Sequencer has been out for awhile, we were surprised when it was updated out of the blue. What else could make this module better we thought? Well, here is just a list of some of the new updates:

Summer is in full swing and we were craving some new oscillators to add to our modular rack. This need was fulfilled by Division 6 labs and Synthrotek with the new Division 6 CEM3340 VCO.

This voltage control oscillator is based off the famous Curtis 3340 IC which has been around for quite some time and have been utilized in many legacy synths.  Our build of the Division 6 CEM3340 was a quick and easy build and is recommended for anyone just getting into modular DIY.

Many synths today utilize chips that mimic the famous Curtis 3340. While this chip is no longer manufactured in mass volume, there is a few places that still sell the chip. What makes this chip so special is it is a self contained, precision voltage controlled oscillator.

Note: The chip used in this kit is not an original Curtis 3340 IC, but it’s damn close!

It features both exponential and linear control scales and up to four buffered output waveforms. ( triangle, sawtooth, square and pulse). They do not require a temperature compensation resistor because they provide their own compensation. Multiple control voltages can be mixed within itself.

Spring is on its way and it is the perfect time for new modules to be hitting the market. We were stoked when the gang over at Synthrotek recently announced that they going to carry a new set of modules made by a relatively unknown company known as Eurorack Hardware (EH).

A total of 5 new modules in all, the OR, E-OR, ATT, AMIX and RING are going to make a splash on the modular scene.  With that being said, we are excited about taking on the new DIY Kits from Eurorack Hardware (EH).

Who is EH? Who makes these new modules?

Eurorack Hardware (EH) has actually been around awhile, you just kinda know them in a different persona. Have you ever heard of Division 6? What about the Dual Mini Sequencer? Eurorack Hardware (EH) was founded by Scott Rise, who is also is the director of Division 6 Labs. Division 6 manufactured the infamous Dual Mini Sequencer and they produce other synth circuits and video game hardware mods.

EH are mainly known for manufacturing hardware for eurorack modular systems. They specialize in various rails, brackets and screws, and pretty much anything you would need to build a custom rack.

Upon partnering with gang over at Synthrotek the world was introduced to the OR, E-OR, ATT, AMIX and the RING. The five modules are described below, each with their own time lapse build, build notes and gallery.

Let’s get one with the builds…

Here is our time-lapse video from our build of the Dual Mini Sequencer by Division 6.

It was a fun build and it took a couple of sessions to complete due to time constraints. The LEDs are particular and the tape trick worked well when trying to line things up.