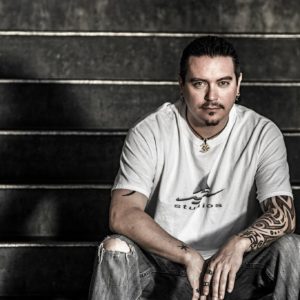 Hailing from California, fiN studios is a state of the art production and recording studio in located in the heart of Sacramento with a partner site in Portland Oregon. We are known for supporting independent artists and the performing arts and have many years of recording/producing experience.

The company was originally started in Springfield, Missouri in the year 2001 by founder and CEO Christian Cameron, In mid-2008, while working on a new album under the moniker of maKo, Christian packed up shop and moved across country to California to start a new beginning and to focus on his one true passion … music.

As an artist, Christian finds influence in artists such as David Bowie, Joy Division, The Doors, Bauhaus, Nine Inch Nails, Skinny Puppy and Depeche Mode. He has a love for vintage synthesizers and also an uncanny knack for the weird and odd musical instruments.  He is currently working on several recording projects and is in the process of a studio overhaul to accommodate is new love for modular synths.

In his free time, apart from his normal 8 to 5 day job and being a husband and father, you will find him tinkering around in the shop hand-crafting modular synthesizers and working other DIY audio equipment.

Do you have a question you are wanting to know the answer to?  Curious about things you see or hear on the site?  We have put together a pretty extensive FAQ just for you.  Check it out by clicking here!

Can’t find what you are looking for on the site?  We made it easy for you by creating a site map for quick and easy navigation.  Check it out here.

Have questions about our policies or procedures?  Want to know what we stand for and what we don’t? You can check out the Privacy Policy page to get find out more information.

If you have any other questions that are not addressed in the policy, please feel free to Contact Us too.  We love hearing from our visitors.

As always, we appreciate you stopping by and checking out the site.  We wouldn’t be here without your support and interest.