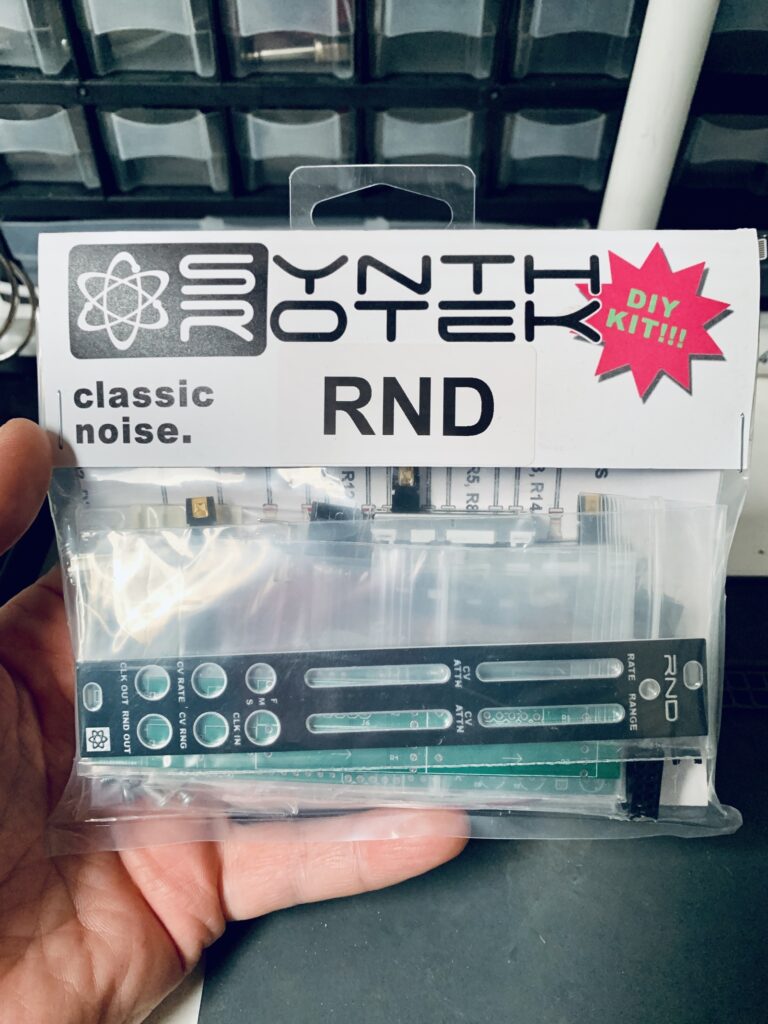 The Synthrotek RND (Random) is a 4HP random voltage generator that is part of the slider series from Synthrotek. With its ambient LED sliders and black panel, the module is a perfect fit for anyone trying to toss a little spice into their tracks.

RND carries its own internal clock or it can be patched by an external clock, giving the user a varying degree of control with regard to tempo. Apart from this, it also has a CV (control voltage) of the clock, so that your random voltages will always be in sync with whatever you patch into it.

Sounds cool huh? We thought so too and now let’s get on with the build.

Let's start with the logic board...

Like the other modules in the slider series, the Synthrotek RND is a relatively quick and easy build thanks to the detailed assembly instructions that are provided via the Synthrotek website. As we jump into the build, we start with the diodes and resistors. Since there are only a few of each, we placed everything prior to tacking it down.

We did use top down soldering on all of the resistors and diodes since there was plenty of room to get your iron into the soldering points. Once this was complete, we flipped the PCB over and trimmed the leads. This is a good spot to double check the flow of solder and reflow anything that needs it.

As we tackled the Waveform Magazine Cattenuator, it was now time to tackle the new LPG/VCA. Like the previous build and the Mini Mult Catwalk, these modules take up about 12HP of space in your rack. Their footprint is small and their impact is huge. As previously stated, Waveform Magazine is on point with their Catwalk series. In case you have missed any of the previous builds or reviews, check out the quick links below to learn more.

Let’s get onto the builds shall we? Building the Catwalk VCA or the Catwalk LPG is relatively easy. The most difficult part of this build is assembling the vactrol or optocoupler as its sometimes called. An opto-isolator (also called an optocoupler, photocoupler, or optical isolator) is an electronic component that transfers electrical signals between two isolated circuits by using light.

You will be putting together 2 of the optocouplers for this set of Catwalks, so turn on your iron and get ready to dive right in.

Issue #5 of Waveform Magazine is hot off the press and is steaming with all sorts of amazing modular goodness. With its reviews, interviews, industry news and modular kits, it is no wonder that so many modular enthusiasts look forward to each issue.

Since the magazines first release, we have been building the WF kits as soon as we get our hands on them. Here are the previous projects that Waveform has released and we have had the opportunity to build/review.

As with all of the previous builds, the quality and the ingenuity continues to get better and better. Waveform really threw everyone for a shocker with their “Catwalk” series from Issue #4, being that neither of the projects took up any space in ones rack (hence the name “catwalk”).

Issue #5 is no different and we are fortunate to have another x3 Catwalk modules (actually 4, the Catwalk Attenuator contains x2 of the same modules). With all that being said and done, let us get on with the builds so you too can see how cool these new Catwalk modules are! If you would like to bypass and jump to a specific Catwalk module, use the quick links below.

As 2020 comes to a close, we wanted to finish up one more build. The guys over at Synthrotek sent over their new FOLD module, which is a dual function module in eurorack format. The FOLD is one part ring modulator and other part wave folder that can take both audio or CV sources. The FOLD is available as a fully assembled module, a PCB/Panel combo or the DIY Kit that we will be reviewing and building here.

On with the build ... The Logic Board

First up are the resistors and there are a lot of them. While they are non-polar (direction doesn’t matter), its important to make sure you are identifying the resistors correctly. Synthrotek did a great job with their visual BOM as it shows exactly what component goes to what area on the PCB. They also have a cool resistor band identification tool that you can download here.

There are 47 resistors and that means take your time when identifying and placing them. When we were unsure, we used our component tester that we have in the shop. Once identified, we placed them into the PCB and lined everything up to solder. We used a top-down soldering technique which kept us from us having to flip the board over and over. When we were done with the top section, we flipped the board and reflowed solder so that our solder points were perfectly placed.